Accumulate 5 minutes in a plank…unbroken anyone?!

“What happens to our foot when we wear traditional running shoes?”

On Monday’s post I talked about the Pose Method of running. The Pose Method is in stark contrast to heel strike running, where one reaches for a long stride and ends up striking the heel of their foot on the ground as the first point of contact per step. One of the primary causes of shin splints is heel strike running. Heel striking on a hard surface like concrete is even more causative. As a result shoe companies have added extra cushion to the heel of running shoes over the years. This cushion is meant to act as a shock absorber in an effort to prevent shin splints. Rather than look at our running technique, we are now walking around with these hefty heels on our shoes. The question becomes, “What happens to our foot when we wear traditional running shoes?” I bring to you the answer given by Dr. Nick Campitelli, a podiatrist who runs the website Dr. Nick’s Running blog and penned the aforementioned article. Click here to read in full.

“When looking at the traditional running shoe, or almost any shoe that is customary in our society, one observation becomes common- the heel. The running shoe has many origins, but many agree that athletic shoes began as a canvas top and rubber soled shoe that was referred to as  a sneakers when U.S. Rubber used the brand name Keds to sell the first sneakers in 1917.  The next major milestone comes in the 70′s when Bill Bowerman and Phil Knight created the Nike running shoe.  These early shoes had little if any cushion and for the most part had a negligible heel.  Over the next 40 years we have seen the height as well as the cushion gradually increase which inadvertently hassled many runners to adopt a “heel to toe” gait or “heel strike” when running.  This height became referred to as “drop”- the distance in height between the heel of the shoe and the forefoot.   Today traditional running shoes have a drop of 12 mm with the heel being 24 mm and the forefoot being 12 mm.  This design encourages an unnatural gait resulting in the  heel hitting the ground first, followed by a rapid “slapping” of the forefoot.

The cushioning that running shoe manufactures incorporate into the heel leads the runner to “feel” as if the shock is being absorbed by the shoe with each step. While this is true, only a small amount is actually absorbed by the shoe, and the rest of the force (2-3 x the body weight) is actually being transferred through the lower extremity. Scientists have been able to demonstrate that by running barefoot, we tend to land more on our forefoot or midfoot  to innately reduce the force that occurs to the leg. Try running barefoot and you will see that it is rather painful to land on your heel and that landing on the forefoot becomes much more comfortable.   In order to do this properly, the forefoot needs to strike the ground first in the region of the 4th and 5th metatarsal with the heel slightly off the ground. The same force that was rapidly transmitted the heel, is now transferred to rotationally force as the heel lowers to the ground thereby astronomically reducing the force that occurs to the lower leg.
Even more fascinating, is what happens to our posture when we simply stand in a shoe with a heel.  The clog by Dansko, which has become very popular among medical professionals, has an elevated heel which drastically changes normal anatomical posture increasing force to the lumbar area of the back (not to mention the 4 pound combined weight of the shoes!). 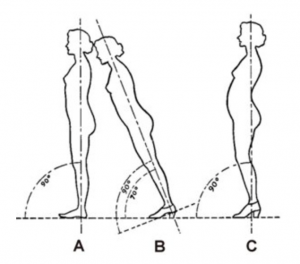 Changes in body position with a heeled shoe. 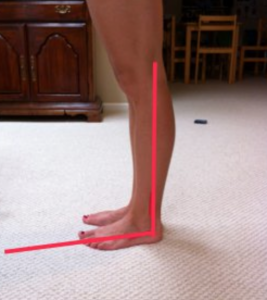 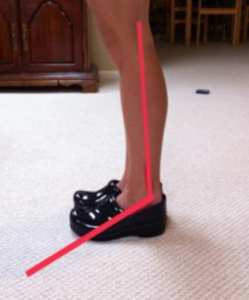 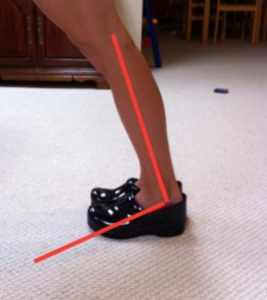 To summarize, the height of the heel that is present in the traditional running shoe, not only tricks the body into feeling that the force is being “cushioned” by the shoe, but also interferes with the foots ability to naturally dissipate the force.”